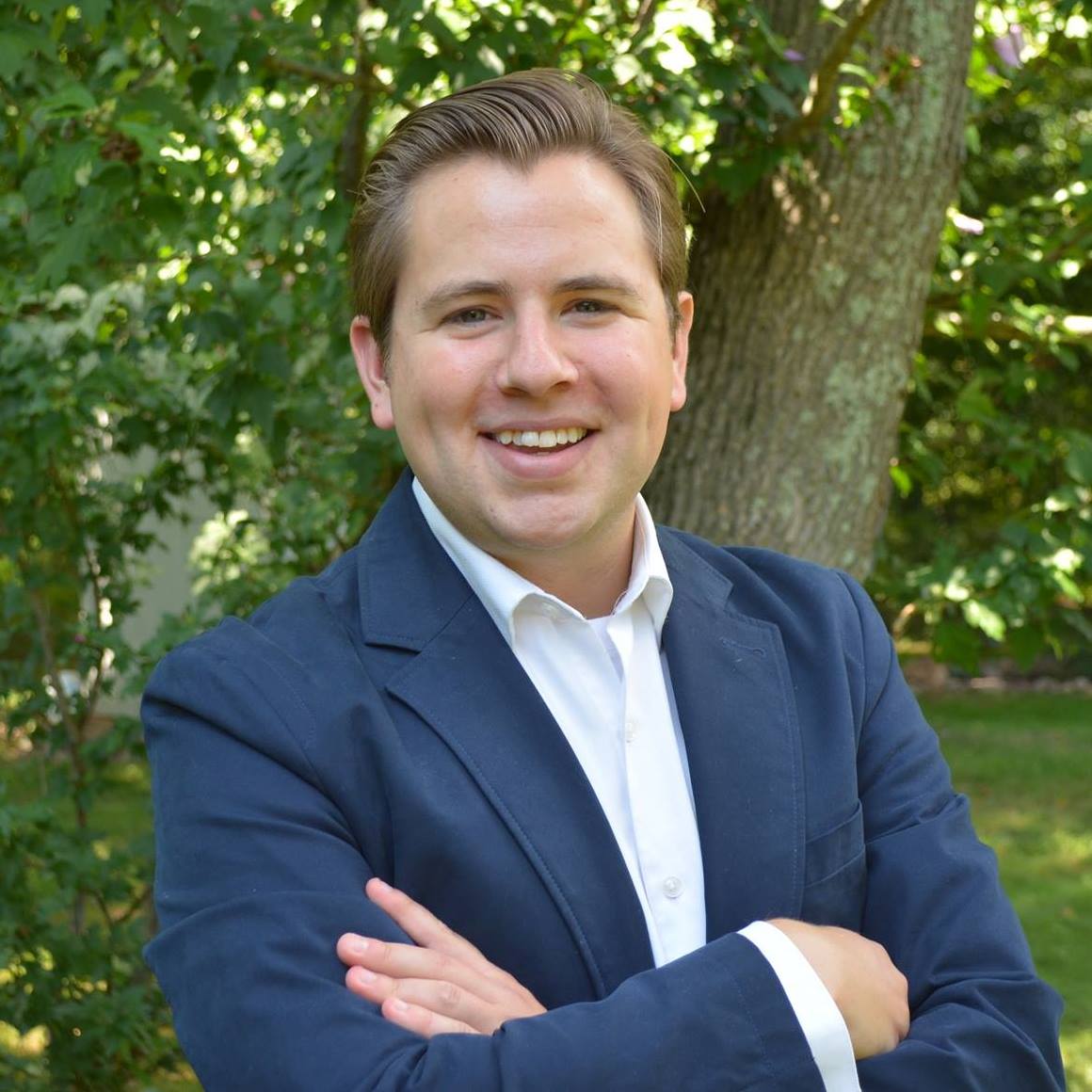 I’m incredibly proud to call Summit my hometown. In fact, I’m a fourth-generation Hilltopper. My grandfather, mother, sister, and I all attended Jefferson Elementary. I went to the middle school and graduated from Summit High School. While in high school, I was Drum Major of the Marching Band, acted in plays, and served as President of the Class.

I then attended Lycoming College in Williamsport, PA. I was the youngest elected, and longest serving President of the Student Body. Our student government made a positive impact on the environmental sustainability, inclusivity, and safety of the campus. I earned a Bachelor’s dual degree in Political Science and Criminal Justice. While I’m proud of all those accomplishments, the best part of my college experience was meeting and falling in love with Megan Cunningham. We are engaged to be married next Summer. We love traveling, staying active outdoors, and spending lots of time with family and friends.

My professional career began on the baseball diamonds as an umpire for Summit Junior Baseball when I was 13. I also worked as a busboy at La Pastaria, and a Lifeguard/Swim Instructor at the Summit YMCA. My other non-profit experience includes an impactful tenure in management at the Madison YMCA. Shortly thereafter, I made the transition into the private sector and in the years since have become an effective salesperson working for Nobel Biocare, the global leader in the dental implant business.

I have spent much of my free time in an effort to give back to this wonderful community. I’m in my second year on the Planning Board and eighth year as an EMT responding to medical emergencies as a member of the Summit Volunteer First Aid Squad.

What inspired you to pursue a role in public office?

Boundless love for this City

I’m both a beneficiary and product of Summit’s excellent culture of volunteerism. I was raised in Summit to believe that if you have the opportunity to help others, you probably should.

What are the three biggest challenges currently facing Summit?

How would you -- in your role as an elected official -- effectuate progress and positive change relative to those challenges?

I believe Summit’s approach should be two-fold. First, protect our property values. We should continue to focus on responsible and transparent budgeting. This year, Council delivered a 0% increase in the municipal tax rate and a 22% decrease in capital spending. If elected, I would continue to prioritize spending only on essentials. I believe we should also explore the budgetary impact of Senior Property Tax Relief.

And second, we should work to grow the commercial tax-base by re-developing on Broad St. During my time on the Planning Board, it has become very clear to me that the Broad St West redevelopment project is as complex as it is essential. The Fire Department needs a new station, part of the area is owned by private businesses, and part of the area is owned by the City. Even with all these "moving pieces" it seems from my conversations with people that providing more options for entertainment, adding residences, and maintaining parking should be the focus.

What I believe is of paramount importance for the project are the following three things. First, we must maintain the character of the city. Second, we must leverage the opportunity to grow the commercial tax-base. And third, we must use this development project as a road-map for incorporating environmentally sustainable practices such as solar capability, green roofs, and EV charging stations added to parking areas.

I have been a first responder for eight years. I will continue to support my fellow first responders as they work proactively to make Summit safer. I believe the traffic calming measures installed on Woodland and Ashland Roads are a step in the right direction.

In 2016, the Master Plan re:Vision was drafted as a result of lots of public input. One of the goals listed is to promote connectivity. I’m glad to be part of a sub-committee of the Planning Board exploring the viability of bike traffic, and I am supportive of efforts to create a sidewalk master plan as well.

The Council has taken several steps to maintain vibrancy downtown. I want to briefly mention three of them. The first is a change to the zoning on the first floor that allows for entertainment uses. This is excellent because experience-based business is thriving and does not compete with Amazon or the Short Hills Mall.

Second, the Council recently created an Economic Development Committee full of volunteers with expertise in the things that make downtowns vibrant. I fully support that decision and I look forward to considering recommendations from that group in the near future.

Third, the city is currently undertaking the extremely complicated task of re-writing our Development Regulation Ordinance (DRO). This document outlines what is allowed in the downtown and hasn’t been updated in decades. All of these things in combination are making it easier to do business in Summit and we should keep up that good work.

What positions and qualifications differentiate you – therefore making you the better choice – from the person opposing you in the November 6 Election?

I have only met Lou DeSocio a couple of times. I reached out to him with the intention of sitting down to get to know him a bit better, but he did not respond.

I am the better choice to represent Ward 2 on Council because I have an understanding of the way the government currently operates, what is required to keep moving Summit forward, and as a first responder I bring a unique perspective.

Additionally, I have attended every Council meeting since April and I have knocked on more than 3,000 doors. Connecting with people in this way has allowed so many of our neighbors to feel comfortable entrusting me with their concerns and hopes for our community. I have also been creating a blog and short video with my three thoughts after every Council meeting. Beyond the platitudes found on Lou’s literature, I don’t really know what he stands for.

Finally, Lou’s campaign literature reads “Vote to bring back Summit’s tradition of excellence.” I wonder what specifically it is that Lou believes our city has lost. From my perspective, Summit is greater than it has ever been. We have challenges like any community, but I believe without a shadow of a doubt that Summit’s best days lie ahead, and that with the right leadership we will continue to work together to keep Summit a truly wonderful destination to live and work.

Quick Hits - where do you stand / what is your opinion on the following 'hot-button' issues:

What can be done to address the repeated difficulties and challenges faced by Summit residents commuting via NJ Transit?

As a general campaign rule, I have tried not to make promises or engage in questions about things that are not directly under the control of the Council. However, I understand the incredible challenge that continued NJ Transit delays, construction, and general dysfunction have caused for so many hard-working women and men in our City.

Though the Common Council isn’t directly in control of the way NJ Transit operates, we can and must join together with other municipalities, our representatives in County, State, and Federal government to make sure they are advocating effectively on our behalf.

Do you support the need for a new Summit Fire Department Headquarters and, if so, how should the City fund the project?

Yes, I support the need for a new headquarters for our Fire Department. The current station’s oldest portion is nearly 102 years old and the newest portion is more than 50 years old. It leaks when it rains, and the department is no longer able to decontaminate equipment effectively, nor purchase new vehicles that will fit in the bays.

The Fire Department has saved thousands of lives, and it is our duty as a community to make sure we provide the tools required to perform the tasks we expect of them. That means the ability to operate out of a facility that is fully functional.

Do you support, or are you opposed to, the establishment of a Free, Universal Full-Day Kindergarten Program in the Summit Public Schools?

I am fully supportive of free, universal Full-Day Kindergarten for our Summit Public Schools. It is a moral and economic imperative. We must not be the kind of community with first-graders having an advantage over other first-graders simply because of their parents’ ability to pay approximately $5,000 extra on top of their tax bill.

Additionally, more and more towns are adopting universal FDK. Madison is the latest example and Summit can not afford to fall behind. Madison’s adoption should be particularly concerning from an economic perspective because Madison is on the Morris & Essex train line. If a young family looking to move from Hoboken or New York faces the choice between an additional $5,000 on their tax bill per child or a universal program rolled into the cost of taxes, I think the choice for most would be clear, and certainly not in Summit’s favor.

What is your assessment of the current vitality of Summit's Downtown?

Summit’s downtown is at 96% occupancy. That’s pretty impressive. But as mentioned above Summit must continue to seek ways to make doing business in town more attractive. To repeat, I’m fully supportive of the change to allow entertainment of the first floor. I also look forward to the suggestions to come from our newly formed Economic Development Committee. And finally, I think the DRO revision will definitely help maintain the character of the downtown while making it easier to do business.

What is your assessment of the scope and scale of Summit's parking challenge, and how best to deal with it?

Summit has had a parking problem since the mid-1940s when the Council first considered adding parking meters. There are a lot of factors that affect our parking problem. Some are that our train station is a regional hub and is located extremely close to the downtown. Towns like New Providence, where the train station is considerably further away do not have as big a parking problem. Another issue is that 17,000 people come in to work in Summit, whereas most other towns have people leaving the city rather than pouring in to it.

The way to "fix" or deal with the problem essentially boils down to two different big-picture options. We could build a brand new parking structure but I don't think that is a good option because they're extremely expensive and can be challenging to repurpose for any other use in the future. The other option, of which I am an advocate, is that we do the best we can with what we have. That includes things like encouraging folks to use ride-sharing services and walking. It also includes things like adjusting pricing to try and make sure employees of the downtown and commuters aren't using the parking spots directly in front of the shops and restaurants.

I'd love to hear from you! Fill out the form below if you'd like to learn more or talk.

You can join us using

Created with NationBuilder – Theme by Tectonica